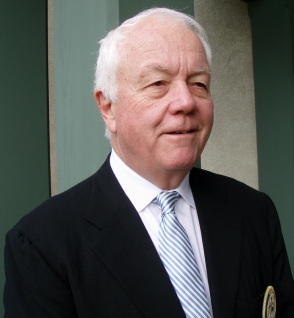 Prior to retiring at the end of 2004, King was Global Head of Real Estate at Deutsche Asset Management. Known then as DB Real Estate, it was one of the largest global real estate investment managers, with more than 1,500 employees in 15 offices around the world, including a significant market presence in North America, Australia, Asia/Pacific, Europe and the United Kingdom.  It managed client accounts in equity real estate across the entire risk spectrum from core to opportunistic investments with assets under management of $44 billion.

Prior to his appointment as Global Head, King had been Managing Partner of RREEF, an industry-leading US real estate asset management firm.   His career at RREEF began in 1979, when it was a small boutique firm with 12 employees and $180 million under management.  He worked both in acquisitions and client relations as the firm grew.  In 1988, he was named RREEF's first Managing Partner and, under his leadership, firm assets grew from $3.5 billion to $17.6 billion, and its business evolved from a series of closed-end funds owning core real estate to a fully-integrated equity real estate advisory firm, providing its clients with a full range of investment options.

King supports conservation efforts and works closely with the Clark Fork Coalition, the Five Valleys Land Trust and the Montana Land Reliance to help them further their goals. He is a supporter of the U.S. Marine Corps Scholarship Fund, an organization that provides funding for the children of Marines and Navy Corpsmen. King is also a member of the board of the Chicago City Day School.

King lives near Charlottesville, Virginia where he teaches a real estate course at the University of Virginia’s McIntire School of Commerce each spring. He is Chairman of the Thomas Jefferson Foundation, the organization that operates Monticello, Jefferson’s home, which is the only residence in America that is on the United Nations List of World Heritage Sites.  He spends his summers and falls in Montana fishing and hunting.