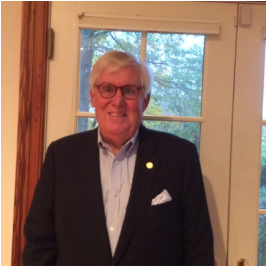 Charles Longley (Chips) retired as CEO of DHL Worldwide Express in 2002 and moved with his wife, Joan, to Charlottesville, Virginia.

He graduated from the University of Virginia in the mid-sixties and went straight into Brand Management at Procter & Gamble followed by a thirteen year career with Quaker Oats highlighted by assignments in Chicago, Colombia, Malaysia and Taiwan. In all, he spent 25 years working in Asia, the last sixteen of which were in Hong Kong.

The Eighties for Mr. Longley were consumed by private merger and acquisition activities with Beatrice International and with the Pritzker Family interests in Asia and the Middle East. He joined DHL in the early Nineties and led them through an extensive global expansion with concentrations in Japan, China and Australasia.

Mr. Longley has served on the Board of several Asian companies and was an adviser to Hong Kong’s Chief Executive on trade and aviation matters affecting the region. He served on the Executive Committee of Hong Kong’s new International Airport and other quasi-government bodies. As a Governor of the American Chamber of Commerce in Hong Kong, Mr. Longley lobbied the US Congress on several occasions in support of trade/aviation legislation concerning Hong Kong and China and has lectured at several global transportation symposiums.

More recently, Mr. Longley has served on the Board of the University of Virginia’s College of Arts and Science and Athletic Foundations and its Advisory Committee on Emergency Medicine. He is currently a member of the Board of Directors of the Farmington Country Club in Charlottesville, Virginia and a Trustee of the Thomas Jefferson Foundation at Monticello.

Mr. Longley attended the University of Virginia on a football scholarship and also lettered in lacrosse. His primary residence is Charlottesville, Virginia.
Powered by