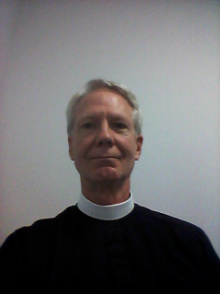 Fr. Randy Haycock retired after twenty years of service as an Army Reserve Chaplain in November 2011.  Five of those years were served on Active Duty: as the Deputy Installation Chaplain for Mobilization at Fort McCoy, Wisconsin (2003-2004), as the Warrior Transition Brigade Chaplain, Walter Reed Army Medical Center (2008-2009), and then as a Chaplain Clinician in Walter Reed’s Intensive Care and Psychiatric Units (2009-2011).  During his time at Walter Reed, he developed a monthly “Pilgrimage of Remembrance and Healing” to the Washington National Cathedral in DC for wounded warriors who had lost their “battle buddies.”  His Reserve assignments have included Chemical Battalion Chaplain, Area and Regional Support Group Command Chaplain, and a Combat Surgical Hospital Chaplain.

On the civilian side, he has served parishes in Kenilworth (1982-1985), Elgin (1986-2001), Western Springs (2002-2003), and Belvidere (2003-2007), all in the Episcopal Diocese of Chicago.  He served as the Interim Rector at Grace Episcopal Church, Keswick, Virginia from April 2012 through October 2013, and is currently the Priest-in-Charge at St. Anne’s Parish in Scottsville, Virginia.  At the Diocesan/Regional level he has served as Chair of the Ordained Ministry Formation Committee, the Commission on Ministry, and as Spiritual Director for the Cursillo Movement in Chicago.