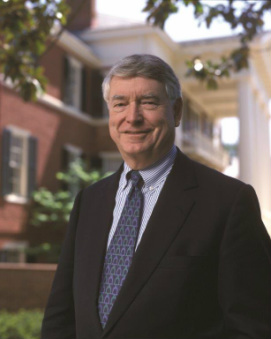 Eugene V. (Gene) Fife is a retired general partner of Goldman Sachs.  Named chairman of Goldman Sachs International in 1988, he played a pivotal role in London, establishing the firm throughout Europe and the Middle East.  He joined the GS Management Committee in 1990 and remains a senior director of the firm.

Following his retirement in 1995, Gene moved to Charlottesville, VA and founded Vawter Capital.  He currently serves as a director of Cequel Corporation and Accudyne Industries and is a senior advisor to BC Partners.

Throughout his career, Gene has participated in numerous activities reflecting his interests in business, government, education and health care.  He chairs the Governing Council of the Miller Center of Public Affairs at the University of Virginia and the Audit Committee at the Focused Ultrasound Foundation.

Gene is a native of Hinton, WV.  He holds a BS degree in business administration from Virginia Tech and a MBA from the University of Southern California.  He served as an officer in the US Air Force.